So today I had to see what is probably a joke about men’s attitudes towards periods, but which also might be a really stupid take about periods from some man on the internet, and I thought that was as good an excuse as any to talk about conceptions of menstruation in the medieval period. In theory, we have come a long way towards understanding how and why uterus’s bleed. In practice there’s a sad number of guys like this out in the world who just…feel the need to say things like this:

Now even though this take is allegedly satirical, if we accept it as satire, then I can just go ahead and make fun of the people it is satarising. If it isn’t then I am making fun of the person who typed this with their own two hands. It doesn’t really matter, and that is what we in the business call a win/win.

I am not going to get into the whole thing about women and beauty, because we have covered that before. And while I love to get mad about evo-psych in general, it is below me to explain to some dude why his evo-psych is more wrong than that of professionals. Instead, we are going to talk about the period stuff. To put it mildly, this is a bonkers take, with the whole angle that people menstruate because they are not supposed to eat meat thing. (Wither the vegetarian who also menstruates, I ask thee?) That is a new one to me, and I guess where the satire comes in (??) but the idea that menstrual blood is toxic and being expunged from the system as a result is a very very old one.

Over here in the European world ideas about menstruation have been recorded since the Hellenistic period. Plato and Aristotle saw fit to remark upon what was going on with periods for example, and they largely did this through, well, vibes.

See the ancient Greeks didn’t dissect human bodies for anatomical observation for a number of reasons including ideas about the putrefying potential of corpses, and also religious beliefs about the sanctity of the body after death. (Yes, that is right, the ancient Greeks. Tell a weirdo who thinks of them as “scientific” to ruin their day.) They did however cut up animals and get some ideas from that so pigs (which have compartmentalized wombs, unlike humans) were sometimes used as a stand in.

Even if they couldn’t look inside wombs, a thing that was observable was menstrual blood, so these dudes were like oh yeah that is the thing that we will work with. Anyway, the Hippocratic scholars got together and the way they saw it, menstrual blood happened because women (let’s remember our homeboys were extremely not ready for the conversation about gender, I am afraid, so they conceive of a fixed idea about gender and sex) in humoral theory were cold and wet. As a result, the uterus filled up with too much blood because they were just overfilled with liquid. The blood would then be expelled from the womb when it was at capacity. This was sometimes perceived as being tied to the phases of the moon. The wet nature of women meant that they responded to the moon, in the same way the tides did, and the moon sort of pulled the excess blood out of them.

Within this conception, all of women’s orifices were connected to their uteruses. So, if a woman had, say, a nosebleed she was actually experiencing her period just, like, the wrong way. Conversely, women were thought to also have fewer such ailments because their periods took care of it all.  One Hippocratic text put it this way: “For the most part, women do not suffer from hemorrhoids, nosebleeds or any other such discharge unless the menses are suppressed; and if any of these discharges do take place the menstrual flow is less in quantity, as if the secretion is being re-routed to these.”[1]

As the medieval period progressed so did conceptions about, well, periods. Galen might have thought they needed a quick jog to stave off menstruation, but medieval thinkers often said that it wasn’t necessarily a lack of exercise and outdoors time that made women menstruate; instead their very nature as cold and wet was to blame. Men, because they were hot and dry burnt off their access humor by just being dudes and rocking. Children were conceived of as being hotter than adults, and slowly losing their heat as a part of the aging process and the slow march towards death. So, little girls, by virtue of being hotter than their older counterparts, could just burn off any excess humors as and when they arose. Post-pubescent women, however, couldn’t burn theirs off and indeed puberty set in when they began to cool down. These superfluous humors then built up in their wombs and had to be expelled. So, periods were like a natural version of blood-letting, wherein women’s bodies rid themselves of the excess blood which would otherwise make them sick.

If women were expelling blood through menstruation because it might make them sick, it stood to reason that menstrual blood had properties that could make other people, plants, and animals sick as well. Menstrual blood was thought to, among other things, dull mirrors, kill crops, and even kill people if they came into contact with it. Interestingly, because of the corrosive and poisonous nature of menstrual blood there arose an attendant concern. What about the post-menopausal women who didn’t menstruate but who weren’t yet pregnant? Oh well that was a whole heap of trouble. According to late thirteenth/early fourteenth medical tract The Secrets of Women

So clearly people in the thirteenth and fourteenth centuries did think that meat might have something to do with periods, but the problem was that poor people meat (love a bit of classicism) made it harder to menstruate. Which meant that the women in question became poisonous. Because they were cold. With me so far? Good.

The idea of menstrual blood and even women themselves as poisonous was accepted widely enough that it inspired a whole legend – the Venomous Virgin. The thirteenth-century version which circulated in the Dialogue de Placides et Timeó told the story, which focuses on a girl who was fed poison her entire life and then sent to the court of Alexander the Great. It says:

….the beautiful young girl…pleased him marvelously and he had to make an effort to restrain himself from going to embrace here; and his temptation was extremely strong. But Aristotle, a clerk at his court, and Socrates, his master, detected the presence of the poison in the girl and would not allow Alexander to touch her. …The Socrates had two serfs brought into Alexander’s presence and made one of them embrace the girl: he dropped dead on the spot.

So that is all wild, but the point of it is that women’s bodies – which were capable of producing poison through the medium of menstrual blood – were also capable of resisting poison. In fact, they were so good at it that they could be used as a sort of poison medium: absorbing and then delivering the poison to an intended object… like a super straight Alexander the Great who hangs around with Aristotle and Socrates. Sure. (Medieval people love fan fic, OK?)

Given this history it is unsurprising that in the year of our lord 2021 we are seeing satire (?) about men’s attitudes towards women and menstruation.

It’s easy to make fun of bad period takes because they are stupid and wrong and also they stigmatise half the population of the earth for something that we really don’t enjoy and have to suffer through anyway. However, collectively our supposedly enlightened and scientific society hasn’t done a whole damn lot to look into the matter. We can’t really blame people if they are regurgitating less sensical versions of thirteenth-century ideas about periods. Overall, we need to work towards treating people who have to put up with periods with a little respect.

One thought on “On periods and dudes who fear them”

Hi! My name is Samaira Guleria, I am 17 years old. I am currently a high school student. I value High moral values towards my family and society. I have had the great fortune of working on a variety of truly inspiring projects while networking with many influential and creative individuals along the way. These experiences include a few fundraising projects with Youth Action Hub and a fellowship program with Young Learners For Action Citizenship, etc. They have taught me that anything once considered growth must never be considered a failure. I heavily believe in working together to create a whole that is greater than the sum of its parts. Even though I am nearing the end of my schooling, my journey has just started. I am committed to dedicating my fullest efforts to achieving my goal. Along the way, I have developed strong leadership qualities as well. I am enthusiastic to exercise my power of expression and look forward to sharing the depth of my ideas and convictions via this page. View all posts by pineapplesourbutsweet 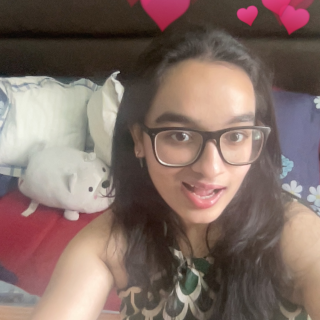 Hi! My name is Samaira Guleria, I am 17 years old. I am currently a high school student. I value High moral values towards my family and society. I have had the great fortune of working on a variety of truly inspiring projects while networking with many influential and creative individuals along the way. These experiences include a few fundraising projects with Youth Action Hub and a fellowship program with Young Learners For Action Citizenship, etc. They have taught me that anything once considered growth must never be considered a failure. I heavily believe in working together to create a whole that is greater than the sum of its parts. Even though I am nearing the end of my schooling, my journey has just started. I am committed to dedicating my fullest efforts to achieving my goal. Along the way, I have developed strong leadership qualities as well. I am enthusiastic to exercise my power of expression and look forward to sharing the depth of my ideas and convictions via this page.